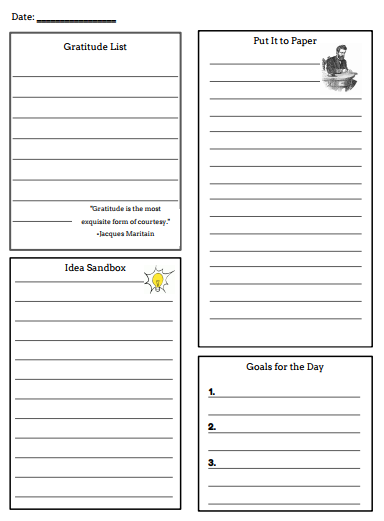 Write It Down, Make It Happen is the inspiration behind my ‘Put It to Paper’ section. Henriette Klauser’s strategy of jotting down those long-term goals keeps them on the front burner. Depending on the mood and the day, those notes can serve as either admonishment, gentle reminder, or inspiration. She also believes that keeping these ambitions alive can flip the switch on the reticular activating system, which can best be explained here: https://medium.com/desk-of-van-schneider/if-you-want-it-you-might-get-it-the-reticular-activating-system-explained-761b6ac14e53

Write It Down, Make It Happen is where good honest hard work and determination intersect with a sincere optimism that keeping those goals ‘published in your head’ raises the odds of the universe responding favorably.

I found myself rooting for those who shared their stories and I think it will raise readers’  hopes that they too might glean some serendipitous assistance.

As for Become an Idea Machine–the inspiration behind my ‘Idea Sandbox’ section–there is something magical about the number ten, as in, ‘list ten ideas especially in terms of ‘making the brain sweat’. to use the words of James Altucher, the first writer I read who coined the term ‘idea machine’ [though Claudia Azula Altucher actually wrote the book].

For me, once I reach numbers 7 – 10 in my daily idea challenge, I generally am wading into the waters of the absurd. The benefits? Absurdity checks the editor at the door, gives resistance a kick in the behind, and reminds me that this list is just for me so there is no reason to feel foolish. And when I drift that far afield can often lead to unexpected breakthroughs.

I have also benefited from using other media or thinking tools, such as my prewriting strategies, to help me along when I’m dragging or to boost my productivity to well past the prescribed ten ideas or to generate more idea prompts for later exploration.

The Doodle Revolution: Unlock the Power to Think Differently by Sunni Brown convinced me to add a ‘doodling’ component to page 2 of every Eclectic’s Journal entry.So many of us have talked ourselves out of even trying to draw something, that if it’s not recognizable and unsullied by missteps with ink or graphite, then it’s not worth doing at all. But with doodling, if nothing else, this component encourages a little artful freeform lettering as I emphasize a concept that is top of mind, such as ‘SIDE HUSTLE’, or ‘FINISH’, or ‘REINVENT’. Repetition of the doodling has also built my confidence in sketching and developing some basic techniques like cross-hatching. And it’s just plain fun. And it’s a nice release of pent-up energy. And, as with the rest of the Eclectic’s Journal, it is just for me. No pressure, try new things, see what develops. And it provides a connection between other Eclectic’s Journal components, which really is what the EJ is all about–connecting the dots between the personal and the creative.

Gratitude: I first learned of the power of thankfulness from Andrew Weil. He shared research that engendering optimism and other positive emotions lowers the level of cortisol, the stress hormone.

My gratitude exercise also breaks me out of ‘me-me-me’ blindness. Honest, I need all three ‘me’s’ to make my point. When I remind myself of some of the good that has happened to me that day, it tells me that there is at least a portion of the world/universe that is on my side. It forms for me–even briefly–my own little bubble of security and it opens my eyes to even more daily positives that I can hang my hat on [and I can feel secure enough to look past ending the previous sentence with a preposition. Luckily, I know the editor and he’s going to let me slide on it…just this once.]

More from the January 500-Word Challenge